The earliest reference to the name in England is  William Cass in the Essex county pipe rolls in 1200. Other recordings include Elyzabeth Casye, who married William Kendricke at St Dionis Backchurch, London, on August 27th 1564, whilst John Cass of Dalkeith, Scotland was summoned before the Privy Council for Scotland in 1566. The first recorded spelling of the family name is shown to be that of Roger Cass,which was dated 1130, in the Registrum de Dunfermelyn, during the reign of King David 1st of Scotland”, 1124 – 1153. 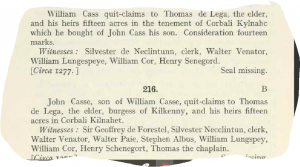 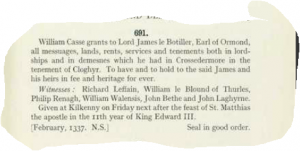 375, Nicolas Casse in Thurles awarded 20d.(pennies) from Thomas Brit for not keeping his pledge.

about 1400,   Walter Casse in Clonmel, listed as participating lawyer in that day’s hearings 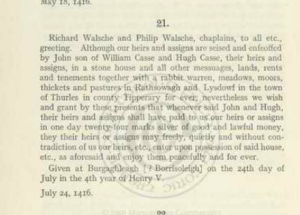 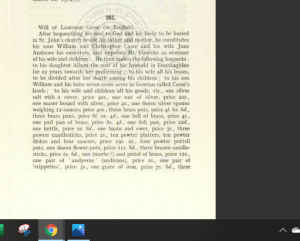 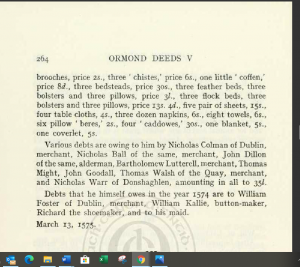 One of our earliest surviving record sources is the so-called fiants of the reign of Elizabeth the First’ The originals were lost in the Four Courts Fire in 1922 but they have been indexed and published. These were warrants to the Court of Chancery in Ireland, which was the authority for the issue of letters patents under the Great Seal. They dealt with matters ranging from appointments to high office and important government activities, to grants of pardons to the humblest of the native Irish. There are a few individuals called Casse mentioned in the Fiants.

Fiants
The originals were lost in the Four Courts Fire of 1922 but they were indexed catalogued and published up to 1603 in the Reports of the Deputy Keeper of Public Records in Ireland (1875-1890). They have also been reprinted in a book The Irish fiants of the Tudor sovereigns during the reigns of Henry VIII, Edward VI, Philip & Mary, and Elizabeth I (4 vols), with an introduction by Kenneth Nicholls of the Department of History, University College, Cork